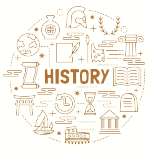 At the earlier 70s of the 20th century computer technologies in most industrial countries and the USA, as a leader of them were developed on rather high level already.

Big computers (mainframes), wide range of so called mini and super-mini computers, manufactured by big companies, local, regional and global networks and other related technologies had supplied government, industry, trade and services fields with all necessary IT possibilities.

All those, mentioned earlier, so called “time-sharing” machines were able to serve effectively for numerous (hundreds) simultaneous users.

Individual terminals of such computers, installed in offices for the personnel, had been giving to users all calculation and other opportunities, supplying with the help of respective computer applications.

Professional IT staff, consisted of hardware and software specialists, had been elaborating new computer configurations and applications and had been supporting of their "7 days a week – 24 ours a day" unstoppable work.

Such computer systems had to be expanded into the homes of private persons, on desks of ordinary citizens in their cabinets, in the form of installation of individual terminals.

Advantages of such computer paradigm are numerous and may be seen now, with more and more centralized model of IT: applications and services on central computer (server/s) in so called Internet "clouds", give the end-users freedom from boring hardware and network maintenance, computer viruses defense, continuous backup of the information, etc.

All those things had to be given to private persons already in 70s, with the help of mentioned above "time-sharing" big and middle-range computer systems, individual terminals and more and more generalized networks, connecting computer centers between each other.

Why and how so called personal computers (PCs) "grabbed the world" during last 25 years ?

There is a theory, having strong arguments, of economic reasons for that !

To the end of 60s USA economy had begun to slow down in all aspects of its activity.

The main reasons were – Vietnam War and USA – USSR competition in military and space fields.

American leaders (Richard Nixon as a President, first of all) had begun to look for resolving the problems and in parallel with disarmament process in the foreign policy, started the process of domestic market consumer activity stimulation.

But, houses, cars, refrigerators and TV sets had been selling widely at that times already in the USA and it was necessary to offer something new and attractive to customers.

PCs had come in the right place and at right time: they were not so expensive (about $400-500 apiece), rather simple in operation (in comparison with big computers) and were able to perform some interesting and useful for ordinary customer functions.

Question was only: how many people were able to afford those devices according to their family or individual budgets ?

Having clear understanding, that quantity of such people may not be very big on the national level – government decided to stimulate banks to wide crediting of those, having desire to buy PC.

Such policy had given the start to so called IT or third technological (Digital) revolution.

Thousands, then dozens and hundreds of thousands, (finally millions of people), had begun to purchase PCs in the USA.

Later, when IBM opened the architecture of its IBM PC and numerous clones of so called “IBM PC compatible” computers had appeared, millions and dozens of millions of people worldwide had started to acquire them.

PC manufacturing industry had accelerated the other related fields and initiated the process of manufacturing of all possible peripheral devices for personal usage.

In conclusion, looking into the past, we can say, that the US government, which had started at 70s special credit policy for stimulation of its inner market with PC purchasing consumer activity, had reached the success – IT revolution had helped American economy to stop the recession and to start its growth during next 30 years.